In order to make the frame and body vibration quickly attenuate, improve the smoothness and comfort of the car driving, the car suspension system is generally equipped with shock absorbers, the car is widely used on the two-way action cartridge shock absorber.

The structure of shock absorber

Good or bad, will directly affect the smoothness of the car driving and the life of other parts, so the shock absorber should be in good working condition frequently. 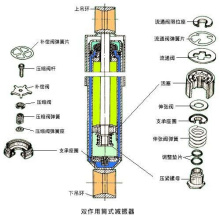 2. Press the bumper hard and then release it, if the car has 2~3 jumps, it means the shock absorber is working well.

3. When the car is driving slowly and emergency braking, if the car vibrates more violently, it means the shock absorber has problems.

After the shock absorber is inspected and repaired, the working performance test should be conducted on the special test bench.

If there is no test condition, we can also adopt an empirical practice, that is, use an iron bar to penetrate into the lower ring of the shock absorber, and use both feet to Step on both ends, hold the upper ring with both hands and pull it back and forth 2~4 times, when the resistance is great when pulling upward, do not feel the effort when pressing downward, and the resistance of stretching is restored compared with that before repair, no sense of air range, it shows that the shock absorber is basically normal .